From Mommie:
"Gamble is very much coming out of his shell too.  He has made many new friends in the neighborhood and is having the time of his life.  In fact, when there are no kids around, he gets bored and very sad.
"After listening to him pout this afternoon, I finally told him to go knock on the neighbor's door to see if the little boy could play.  Eager to take my advice (this is something that I am well known for doing when I was a kid), he went down there.
"After a few minutes, he comes back with a popsicle.  Confused, I asked him what happened.  He said that he ran into his dear friend Kayla and that she gave it to him.  Happy as a clam, he ate it outside, waiting for some kids to come out.
"With the looming rain, it wasn't looking promising.
"Then he proclaimed that Caden could play once he finished dinner and that he needed to finish his homework and dinner so he could go back and play.  Excited for him, I told him sure.  It wasn't until later that I learned that Gamble had Kayla go to Caden's house and ask if he could come and play with Gamble while Gamble waited on the sidewalk for an answer.
"Five years old and already getting other people to do his dirty work.  Nice.  I guess that is why he came home later and tried to tell me what I should be doing.  Ummm, no.  Think again, kid."
Posted by kpd at 12:46 PM No comments:

From Nicole:
"Random is becoming such a big little girl.  The other day, she played outside all day with Gamble and his new friends, Cade and Cara.
"Random kept up all day with them and even skipped her nap.  She loves to be outside and loves to play, as you well know.  Well, to keep them out longer, I would periodically throw snacks outside.
"After 2 bowls of goldfish, I thought that it would be enough for awhile but then R came in to see what I was doing and found my stash.  She grabbed for it and immediately went running outside "Kids!  Kids!" as if to say "I got the loot, how cool am I?"
Posted by kpd at 12:41 PM No comments:

Random is getting the hang of location.  She now calls out in a cute little voice when she's looking for someone.
"Bubbles!  Eye-oo?"  (trans: Gamble, Where are you?)
And if she finds him, she squeals and says, "Ay-Yiz!" (trans: There he is!)
Yes, she still calls him Bubbles...
Posted by kpd at 8:15 PM No comments: 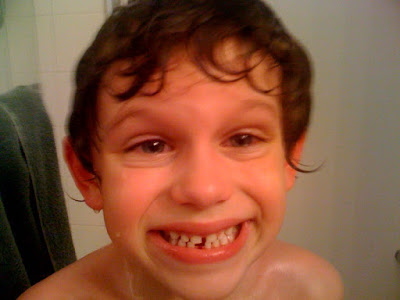 As you can see from the picture, Gamble has one tooth less.
He lost it in the shower.  Pabu was in the tub, and I heard Gamble yell out.  I went to see, and he was crying, and had his hand over his mouth.
Looked like maybe he had some blood, too.
I ran and got him a salt water rinse, and helped him out of the shower.  Right then I snapped this pic - it was tough to get him to smile then.
He had to call Nic's folks right away, so he did, and while I was helping out the Pobbes, I heard him say, "Do you think I should tell Daddie?"
Yes.  Yes he should.
And he did.  When I asked, he said that he was wondering whether to tell me how he lost his tooth.  I hadn't even thought of that.
He said that he wasn't able to open the shampoo bottle, so he tried to use his teeth.  He must have gotten it open, though, since he had shampoo in his hair when I found him.
Tooth fairy comes down the chimney tonight!
Posted by kpd at 8:09 PM No comments:

On our big day out the other day, we finished the day off at the DQ.
We were halfway finished with our ice creams when I remembered something.
"Gamble, I got you a medium!  I don't know what I was thinking.  I always get you a kids cone."
He looked me square in the eyes and said calmly, "Daddie, you did the right thing."
He sure knows how to play me.
Posted by kpd at 7:51 PM No comments:

In the car the other day.
Gamble: Daddie?
Me: Yeah?
Gamble: I want to be someone to make a special day.
Me: Make a special day?
Gamble: Yeah.  I want to make a day that everyone gets to celebrate.  I want to be the one to make that day.
Me: You want to create a holiday?
Gamble (excited): Yeah!  And we'll call it Celebration Day.  And everyone can come to my house and celebrate.
Me: You mean like your birthday?
Gamble: Not exactly.  Like a holiday.  And people will all come to my house and celebrate Celebration Day.
Me: I don't see why we can't do that.  We'll have to ask Mommie whether she'd be ok with sending out mid-summer Celebration Day holiday cards to your friends to come over, but there's no reason at all you can't invent any reason you want to have a party.
Gamble:  I have a good idea for another new holiday.  St. Daddie's Day!
Me: Sign me up.  I like that holiday.
Posted by kpd at 7:41 PM No comments:

Random's developing so quickly.  Day care has done wonders for her, and weekly - maybe even daily - I'm impressed with something new she's doing.  It's all happenening faster than I can blog it, so I'm going to hit the high points here.
She's counting clearly now.  She doesn't get everything pronounced just right.  For example, she says "seven" as either "selen" or "senen".  And sometimes she gets stuck.  Last week, she got stuck at selen.  She counted one-two-three-four-five-six-selen... six-selen... six-selen.  Basically stuck in a loop until I would say eight, at which point she'd say eight-nine-ten, Yayyyy!
This week, she seems to be trying to count to twenty, but gets stuck at fourteen like a verbal Pooh bear and we have to get behind her numbers and push.
The other thing that she's doing these days is being independent.  It's amazing.  She wants to dress herself, feed herself, dip her food into barbecue boss.  Try to do anything for her, and you'll be rebuked with a sharp "Nan-num turn!"
She also likes tea parties.  I thought that whole thing was a myth, but she'll pour me tea and I'll pretend to drink it all day.  I mean, really.  All day.  She loves it.
Posted by kpd at 7:34 PM No comments:

A Tear to the Eye

Tonight, Gamble and I got home from a very busy day out.  Gamble looked at the bathroom counter in the kids' bathroom and exclaimed, "Daddie!  Where did this new SpongeBob soap come from?"
"Mommie got that for you.  She thought you might like it."
His face kinda screwed up and he looked suddenly sad.
"Gamble, what's wrong?"
"You know, Daddie, sometimes when people get so happy, they might look sad and have tears of joy.  I have tears right now."
Emotions coming in with his adult teeth.  Check.
Posted by kpd at 6:31 PM No comments:

I don't believe it.  Not even six, and Gamble has his first loose tooth.
I'm at least a little creeped out that he's starting to lose body parts.  I'm starting to think of him as GambleFly or BrundleGamble.
Posted by kpd at 6:32 AM No comments: