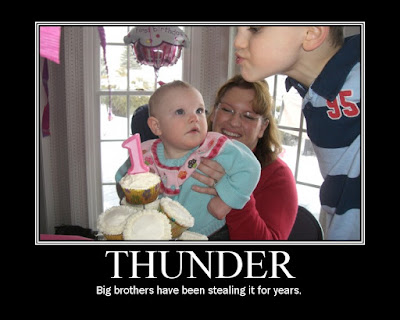 I just had to post this picture. I don't know why I find it so funny, but I do.
Posted by kpd at 5:39 PM No comments:

Those who know me know I like female vocalists a lot, and I keep a lot of CDs in my car for day-to-day bubblegum mindless enjoyment.

So Gamble and I went out to the store the other day, and I'd put a random collection of music from The Donnas in the player. He listened with me for about five minutes, enough to have heard a couple songs.

"Daddie? Can you turn this music off?"

"Gamble? What's wrong? Are the guitars too loud? Too much drumming?" It is rock, after all. Party rock. Drinking girl rock. And yeah, I like it.

"Daddie? Do you know? That's a girl singing."

Well, I suppose that eventually all kids diverge from their folks in the music category...
Posted by kpd at 5:38 PM No comments:

Gamble and I were having a swordfight the other night, and he whacked me a good one.

In a triumphant, ringing voice, he shouted, "Touche, Jose!"

I don't know why this struck me so funny, but I almost shouted back, "Achtung, Habib!"
Posted by kpd at 9:34 AM No comments:

Backwards Words Say To Used I

We got our glasses Wednesday. Gamble's eyes look very big through them, so he looks a little different than in the picture a couple days ago.

Already, whenever he has them off, I don't recognize him. It's amazing how quickly you become adjusted to how someone looks with glasses on. He looks so studious and grown up with them on, too.

Things haven't gone terribly smoothly with them. At first they itched him. Then they bothered his ears.

On Thursday, Gamble was working with Nicole on an art project for Valentine's day when I called them from my commute home. We'd talked for a few minutes and I hear, "Gamble, what the...? I gotta call you back."

A few minutes later, Nicole called me back, freaked out a little. "Do you know what he did? He wrote his name backwards."

"He wrote the letters in the wrong order?"

"No. He wrote them right to left. His whole name. Each letter is backwards."

"Do you have any idea what would cause this?"

"Be serious, do you think it could be his new glasses?"

"Danny's not here, Mrs. Torrance. Redrum! Redrum!" Ok, admittedly, I'd crossed a line here. But I was pretty freaked by this turn of events.

We gave him a hiatus from his new glasses only a day after he'd got them. We went back to the doctor yesterday, who confirmed that the prescription was corrrect, and that he was seeing 20/20 from his left eye. His right eye? It was heartbreaking to watch him sitting in the chair with his glasses on saying that he couldn't read what looked to be extremely large letters on the wall.

The best thing is that we caught this early, and that we have a chance to get his eye focusing well enough that the brain will stop ignoring it, giving him back the bifocal vision that the rest of us take for granted.

And as for the backwards writing, we don't have an explanation. The doctor thought he might be experimenting. I don't know. I don't think that we understand exactly what's going on with him. Theories about right/left brainedness and the awakening of the left hemisphere with all this new visual input abound, but we don't have an answer. Anyone who's ever seen anything like this, I'd love to hear from you.
Posted by kpd at 9:27 AM No comments:

Random's now pulling up on everything, and she can even cruise around a little.

But she can't get down. She gets stuck.

Nicole thinks she's timid, like an old lady with a broken hip, and that once she's up, she's terrified of falling. I don't know how many times we've gone out to her when she was crying, and there she was, standing at the coffee table, hysterically afraid to fall.
Posted by kpd at 9:13 AM No comments: 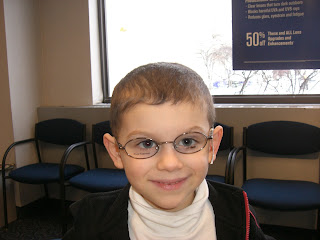 "Through an unfortunate twists of events, we have learned that G needs glasses.

"G had been telling us for a couple of weeks that he didn't feel right and that his brain wasn't working the way it use to. After checking for signs of a neurological problem, I began to check for problems with his vision and sure enough, to my surprise and sadness, G couldn't see out of his right eye. So, I took him to see my ophthalmologist (thanks again Julie Green for the recommendation) and he was seen by what is suppose to be one of the best Pediatric Opthalmologists around- Dr. Anderson. After several tests and a dilation of G's eyes, it was confirmed that he is considered legally blind in his right eye. This is to say that without his left eye (his good eye) and/or his new glasses, he cannot see much at all.

"G's formal diagnosis is hypertropia (is a condition of misalignment of the eyes (strabismus), whereby the visual axis of one eye is higher than the fellow fixating eye) leaving him extremely farsighted as well as esotropia of the right eye (is a form of strabismus, or "squint", in which one or both eyes turns inward) and amblyopia (or lazy eye, a disorder of the visual system that is characterized by poor or indistinct vision in an eye that is otherwise physically normal, or out of proportion to associated structural abnormalities) which are complications from the hypertropia.

"The Doctor is hopeful that the glasses will help correct the esotropia and the amblyopia. She will re-check him again in about 8 weeks to see if there has been any progress and depending the progress, she may decide to patch his good eye, in the short term, to help strengthen his bad eye (the right eye). We are told that it is good that we caught it so early but I am feeling quite guilty for not catching it sooner. G has been exhibiting signs for over a year and I didn't know. Thankfully G wouldn't let it go on Friday night and got my attention early enough that we may try quite a few things to help him recover some sight in that eye.

"We will keep you all posted."

I've included a picture of G wearing his new glasses so you can all see how smart and handsome he looks with his new glasses. They're not ready yet, but this is a pic from us picking out the glasses.
Posted by kpd at 9:53 PM No comments:

Gamble was having trouble in the bathroom last night.

"Daddie, can you come help me poop?"

I sit on his little stool. The little puzzle stool that Nicole's cousin Kenny got him that has his name spelled out in wooden blocks. I'm always a little surprised that it doesn't collapse under my weight.

I watch as he strains and squirms. Pushes and grunts. Lifting up any obstructions, he peeks down there.

"Daddie? How come it always hurts when I poop? It always feels like it's square, not circular."

Oh, dear. The fun just keeps on coming. Current analysis is that he's not eating much because he's not pooping much, because he's frequently constipated. Nicole gave him some fiber last night, and hopefully, he gets on to poo that's more cylindrical, not rectilinear.
Posted by kpd at 9:25 AM No comments:

Happy belated birthday to our little girl! Random turned one on Monday, and not only did we celebrate for two days in Ohio, but we continued the celebration by taking her to get her first haircut and going out to dinner at El Famous Burrito.

The birthday girl had turkey dogs.

When we got home, the two kids and I played for a bit while Mommie was working on the house. It was the first time we were all rolling on the floor together, in what amounted to wrestling. Random would mob and mug Gamble, and I'd apply the tickle spider liberally to them both, causing fits of giggles.

We've already mentioned that Random's clearest word is "Baby", but Monday night, she opted for a different cadence, one that made it come out "Baby B! Baby B!"

So now, sometimes, that's what I call her.

Happy Birthday, Baby B!
Posted by kpd at 7:09 AM No comments: