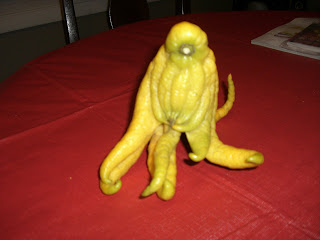 So I was shopping at the Jewel tonight, and I picked up a new family member. I've decided to call him Steve. As you can see, Steve is a small, tentacled, yellow alien cyclops.

I think that calling him Steve is a lot nicer than calling him a creepy little fruit thing, despite that being a deservingly accurate description.

I was at the Jewel tonight when I saw this little orphan alien, sitting with his two brothers by the bananas like three day-laborers in front of a Home Depot. Except they did not have a sign saying, "Painting, shingling, decking." They didn't have a sign at all.

So, really, I had no idea what planet Steve was from, or what species of alien fruit he might be.

Except you know me. I thought I knew exactly what it was. And it turns out, I was right.

But I didn't tell the people in line that. In fact, the cashier had never seen an alien fruit like Steve. She asked me what he was, and I told her I couldn't tell for sure. The bagging girl said he looked like a scary alien, and I assured her that I would keep my other fruits safe from Steve.

They called produce; they called the store manager; they had someone come out and appraise Steve, but they had no idea what he was. He must have been cleared by the MiB during the day shift and abandoned in the banana-land.

Eventually, they allowed me to leave the store, having discovered a workaround to their strange alien immigration laws.

As soon as I got home, I had Nicole verify that I had bought what I thought I'd bought. Wikipedia is wonderful for such things. On showing Gamble, he cracked up. He thought Steve was really cool.

First he asked if he is a pumpkin. When I told him that he needed to smell Steve's butt (where all the tentacles come togther), he cracked up again, and he did.

"You see, Gamble, this fruit is called Buddha's Hand. It's a citric fruit, like lemon." Except it has an additional delicious scent. Something absolutely fabulous. Like the smell of a mouthful of fruity Mentos (that's what it smells like. Really. It's better than it sounds).

"When can we eat Steve?" asked my little cannibal Gammible.

"No way. It's way past your bedtime."

And I went and sang him a lullaby about a very special toy at Christmas.

Then I came back to the kitchen to sniff Steve again. Wow!
Posted by kpd at 7:46 PM No comments:

Good days and bad days. Gamble differentiates between them using the word "sparkly".

As in, "You know what would make my day sparkly, Daddie? If we could play Super Mario Galaxy. Just a couple stars? Please?"

Of course, I like to give into these whims of his.

He's always rating his day, and if it's going well, he's hugging and telling you his day's sparkly. If he's bored, he claims it's the worst day ever. It's been going on a while, and didn't really seem that important.

But today he went beyond.

Today we played Super Mario Galaxy, and we also played Pokemon Pinball, but in addition to that, I did something I'd not done in years. I made cutout cookies. The recipe turned out very similar to what I used to have with my mom years ago, which was exactly what I was going for.

As a result, he got to help me in the kitchen, one of his favorite things, and he also got to eat a frosted sugar cookie, a rare treat for him.

Later in the evening, after his bath, he and I were sitting at the kitchen table. "Daddie? You know my day today was cake-ish."

"Cake-ish? Is that what you're saying, Gamble?"

"Yes, Daddie. Cake-ish. It's even better than sparkly, and it means I love you more."

"And maybe tomorrow, we can have a day that's two cake-ish."

With that, the conversation was over. I've never heard him talk about "cake-ish" before. He pronounced it very clearly. All I can think is that he heard the term "kickass" and misinterpreted.

Then again, it just could be that cake beats sparkles...
Posted by kpd at 8:47 PM No comments:

Gamble really likes playing Pokemon Pinball on my Nintendo DS, and we often let him play as a treat if he's been a really good boy (which is most of the time, truth be told, though his newfound habit of challenging authority is certainly at odds with his continued gaming). He's pretty good, and has collected about 150 of the available 200 Pokemon. You're lucky to catch one new one a game, so that should give you an idea of how long we've been playing it.

To do this, he'll often sit on the couch, or he'll sit on the floor. Sometimes we sit together and play; one of us watches the other play.

Now that Random's crawling, she too feels the urge to catch 'em all. And she's insistent.

We were all having family time in the living room the other evening, and she wanted to see the screen. Except for her, seeing the screen involves putting her hand directly over the screen, resulting in the pinball draining out of the bottom.

SO he turns sideways or puts his back to her. Nic and I watched as she grabbed the shoulder of his jammies, and using the leverage she had on the rug (he was on the pergo), she spun him around, then slapped her hand over the screen. She's not fast, but the audacity!

So we kept making with the falsetto, saying things like "Excuse me, sir! I'd like to see you play, sir!" at just the time she was grabbing for him. Oh we were all in stitches!
Posted by kpd at 9:40 PM No comments:

When a Gamble Calls

One of the lessons this past week was teaching Gamble about phone numbers. She taught him the emergency number, which I anticipate him using the next time Nicole doesn't roll out of bed the second he wants his Cheerios.

We also wanted him to know his own phone number, in case of trouble. After working with him for a few minutes, he learned his number, and proceeded to call the house from Mommie's phone. He repeated the trick for me, and it made me feel that there was going to be another kind of 911 call.

"Officer, I keep getting these prank calls at all hours of the night."

"Ma'am, those calls are coming from inside the house!"
Posted by kpd at 7:38 AM No comments:

Random is now standing more and more. This reminded Nic of an incident just a few weeks back where Random wasn't quite moving yet.

Of course, one day he did. When questioned about his method, he sheepishly responded with, "I rolled her."

No, but Nic said that he still had a sheepish grin on his face, and she knew that he had more to tell me. She pressed the question further. He said he rolled her... like a snowball.

He's outlandish!
Posted by kpd at 7:33 AM No comments:

Random slept roughly 12 hours in a row last night. About 9-9. Maybe she's finally getting out of her cold that she's had all week.

Or maybe she just knows that her Daddie needed the rest. This may be the latest she's ever slept in.

From Gamble this morning.

"Daddie? Do Grammie and Grandbear live on Earth?"

Oh, some days there's a right answer and then there's the answer I really want to give.

I'll leave it as an exercise to the reader which one I gave...
Posted by kpd at 7:25 AM No comments:

On the way home from work today, Nicole had me in stitches. She had to spell everything that she didn't want Gamble to know she was telling me, but because I was in the car and not on speaker, I simply laughed out loud heartily.

So today at tennis class, Nicole kept wondering why his hair looked so messed up. He's always had funky hair that's so fine it's hard to comb. That's why we keep it pretty short.

He didn't really want to sleep at naptime. Nicole tells him that he can play with his toys as long as he stays in his room. He played quietly for his naptime.

Earlier today, Nicole put his tray of art supplies in his room to get them away from the baby. His art supply box has a wide variety of papers, crayons, markers, play dough, glue, pinking shears, and scissors.

Random was crawling around the living room last night when we returned from Ohio. She was fascinated by his art box, because it has some strings in it used for lace-up projects.

Random has developed a willingness to crawl and bite anything that looks like an electrical cord. Gamble never had this fascination, but she crawls to anything that's stringy.

"Gamble, why did you cut your hair?"

Seems like I've heard this on an old Bill Cosby record. "Himself" maybe. The one in which he comes home and asks his kid why he gave himself a reverse mohawk, and all the child can do is say perplexedly, "I don't know."

I look at his hair. When Nicole spelled out the situation on the phone, she spelled it M-A-N-G-L-E-D, but it really isn't that bad. He clipped his bangs at a funky angle, sure, and he got himself dead center of his scalp.

"Gamble, where did you put the hair that you cut off?"

What? For a keepsake?

Nice, so there's a bunch of loose hair in with the markers and glue. Neat.

Hey, he was nice enough to give us two weeks before Christmas pictures so that it has time to grow out.

Back to the regular speed of life.

I don't know what else to say. She crawled a bit on my birthday, and then I didn't really get to see intent until this past weekend, when I put her on the floor and bade her crawl. She did, after a fashion, but only to get to something she finds fascinating.

And now you can really see the intent. She's all about moving. She doesn't crawl properly yet, nor does she army-crawl. She jacks her knees up underneath her and kind of sproinks forward. And now that she knows she's mobile, she's starting to get frustrated whenever she's in a chair or strapped down.