Last night, Gamble and I worked on earning his Trilogy badge. As everyone knows, all little boys are have required viewing, and much of that required viewing comes in the form of trilogies. Star Wars, Indiana Jones, Lord of the Rings, Godfather, etc.
We've been holding off on finishing the second of the two Star Wars trilogies for a while now, because Episode 3 is a little darker and scarier than the others. But it's been his whole life's focus to see this movie. He's played the Lego version of it, and even read a lot of the novelized version of it, so given that his peers (all 8 and in 2nd grade) have mostly been allowed to see it, we thought we could let him.
I promised him that if, while his Mommie was out of town, he made good decisions and helped me with Random, I'd let him stay up late and continue another Trilogy we started by watching Temple of Doom. Well, he was so good and so helpful that last night was the night. He'd been built up all day with talk of Indiana Jones, and I wasn't sure how the bait and switch would go over.
He lit up. He was glued to every word, every scene. Every once in a while, I paused to ask him questions to see whether he understood some of the finer points of how Revenge of the Sith tied the two trilogies together, and he was very articulate and mature about his explanations.
He did very well. After the movie ended, and Anakin had completed the descent to the dark side, black suit and all, Gamble started walking to the stairs.
"Where are you going?"
"Going to brush my teeth. Time for bed, after our movie, right?"
"I thought we were going to watch Temple of Doom"
I thought he was going to jump out of his skin with excitement. His eyes grew huge, and his smile was bigger than any I can remember. "Can we?!?"
"Sure."
And, as they say in the opening scene of Temple of Doom, anything goes. We watched the movie, which I hadn't seen in a very long time, with Gamble predicting the next events with uncanny detail, because he's been reading the book for a while.
But unlike with Revenge of the Sith, Gamble was full of questions, and I noticed a striking resemblance to Willie, the female lead in Temple of Doom. I never noticed exactly how relentless her annoying conversation could get in that movie, and his relentless questions provoked me into saying something.
"Gamble, you know you and Willie have in common. You both talk non-stop!"
"No, Daddie! I'm not a girl!"
Fair enough. He had me there, but that didn't stop him from pushing on.
"And I don't have cooties!"
Oh, ha. I see what he did there. She's a girl, so she has cooties. He's not a girl and therefore has no cooties. He pressed on.
"And I don't have boobs!"
That sudden feeling of a loss of cabin pressure. Hey, wait! Where'd he hear about boobs? I'm not sure I've mentioned those to him yet. Mental bookmark, but he pressed on.
"And," he finished, triumphant, "she doesn't wear glasses!"
There you have it. He's growing up, having earned both his Star Wars trilogy badges, and already well on his way to his Indy badge.
Posted by kpd at 6:19 AM No comments:

Our baby girl is growing up before our eyes, and I bet Mommie's sorry she's missing this one.
Random begged and begged to be allowed to take a shower this evening. Gamble and I both figured she would hate it, as she hates to get water in her face, and we did our best to warn her against it.
But she's right now proving us wrong. She loves it. Beyond words. I am going to have to pry her out of there, but I wanted to tell everyone how much she loved it.
I can here her from here, "I'm in the shower! Honey!"
Posted by kpd at 5:06 PM No comments:

Home with the Kids

Tonight, a special treat. Gamble, Random, and I are home together, and Gamble and I are planning to stay up late.
Mommie had to make an emergency trip back to Ohio for the funeral of a dear family friend that passed on. Lew Snavely, former Maumee neighbor of Vince and Kathy Davis, passed away and the funeral is tomorrow. Our hearts are with his widow, Great Grandma Charlotte to the kids, through this tough time.
Posted by kpd at 5:04 PM No comments:

Every night at bathtime, Random plays with her toys in the tub. A few minutes from washing her up, I go in and tell her it's time, and she asks, "Pickchoose?"
If you'll recall, Gamble used to say something similar every time he wanted to communicate that he wanted to make a choice. He used to say, "Me pick, me choose!" Random has this down as pickchoose, and we only really do it one time of the day, during bathtime.
What I do is, I go to the closet where we keep all her jammies and pick two out that she can wear, based on weather. I try to cycle in her favorites first.
Then I stand by the bathroom door and say, "Ok, tonight you can choose either the long purple dress or the polka-dot footie pajamas."
Then she makes the pickchoose.
Posted by kpd at 5:59 PM No comments:

Ok, I don't know what it is.
Gamble, while capable of putting in an award-winning poster for the entire Kendall County, is wholly incapable of flushing the toilet.
I'm not kidding; there's not a day goes by when I don't open a bathroom door to find a toilet-dook shrouded in teepee and peepee, lying like a flounder at the bottom of the bowl.
That little stinkerbutt!
Posted by kpd at 5:55 PM No comments:

Everyone Considered Him the Commander of the County 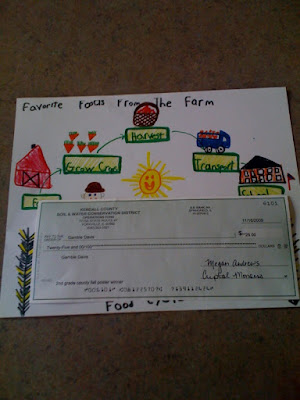 Congratulations to Gamble for winning the 2nd grade Kendall County Foods from the Farm poster contest. We are so very proud of him! He won $25 in prize money, a book, a pencil, and he had his picture taken with his teacher for the newspaper (don't know which). Here's a picture of the winning poster, obscured somewhat by the winning check!
Posted by kpd at 6:16 PM No comments:

Gamble and I made a turkey. It was about a four hour creative project spread out over two days. It was my first crack at papier mache, and it came out really well. See a couple videos of it here and here.
Posted by kpd at 6:09 AM No comments:

From the Chief:
"Two nights ago I got busted by Gamble!
"Whenever Gamble asks me a question that he believes I should know, I grab the computer and quickly look it up. Well, we were talking about one of his favorites, Star Wars, and the question he posed was 'GrandBear, what was the title of Episode 3?'
"I did my best to stall while I fired up the Google browser and while it was loading, Gamble said: '...and GrandBear,
don't go looking it up on the computer.'
"The jig was up. I realized that he's on to me, and I was busted! I was caught off guard. I was amazed and impressed at the same time. Nice job Gamble! The bigger question is how long has he known that I was looking the details up on the computer and what prompted him this time to indirectly tell me he knew?"
(Daddie: Ed - I didn't give the bear away. I have no idea how Gamble would have twigged to the ruse.)
Posted by kpd at 7:17 PM No comments: